The band is award winning guitarist Tristan Thomas (lead singer/guitar), Jordan Evans (bass/backing vocals) and Perry Davies (drums/backing vocals). FLORENCE BLACK has spent most of 2022 on the road and on stage making up for lost lockdown time.

Singles from the album achieved their own successes, CAN YOU FEEL IT? and fan favourite SUN AND MOON both became ‘Track of the Week’ in Classic Rock Magazine and both placed highly in the iTunes download chart on release. SUN AND MOON was also listed on Planet Rock Radio’s ‘A’ playlist two weeks running and was highly praised by Kerrang Magazine.

FLORENCE BLACK have previously supported Stonesour, Reef and Phil Cambell and are preparing to join Steel Panther as main support on their EU Res:Erections Tour from June. The band returns to the UK to prepare for their own WEIGHT OF THE WORLD headline run in October.

“Well some bands got it and some bands don’t. Florence Black fucking got it!” – Benji Webbe (Skindred) 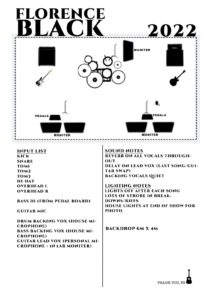